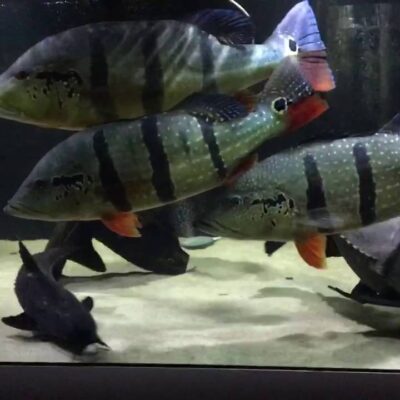 Synodontis Schoutedeni is found only in the Democratic Republic of Congo.

A dimly lit aquarium with a soft substrate and rocks, pieces of driftwood and twisted roots arranged to form hiding places suits this species. Floating vegetation is also recommended in order to diffuse the light entering the tank. Other planting is beneficial but not essential.

Synodontis are omnivorous and are most unfussy in terms of feeding. Frozen, live and dried foods are all accepted. It also relishes vegetable matter in the form of shelled peas, cucumber etc., which it will rasp at with the teeth in its lower jaw.

A peaceful fish that can be maintained with many species, provided they are over 2″ in length and thus can escape predation. Good tankmates include Alestiid tetras, Pelvicachromis sp. and other peaceful cichlids, Mormyrids, Gouramis, rainbowfish and larger rasboras and barbs. It should not be kept with boisterous species such as Rift Lake cichlids. It is territorial but can be kept with others of its own kind, if each fish is provided with a refuge it can call home.

The female is plumper than the male, when adult. It can also be sexed by examining the genital papillae. This is not for the amateur however. The fish should be held ventral side up in the palm of your hand and the dorsal fin taken between your middle and ring fingers in order to avoid being pierced by the sharp dorsal fin rays. The genital area you are looking for is concealed beneath the pelvic fins. This can be exposed by pulling (gently) on the caudal fin. A male fish will exhibit an extended papillae which should be pointed and ridged. The spermatoduct can be seen on the caudal side. Females also have a clearly visible papillae but this is more rounded and the oviduct is on the opposite side to the male’s spermatoduct. Most species of medium/large Synodontis can be sexed using this method but it should be noted that most species take 2 years or more to reach sexual maturity.

SAVE & ACCEPT
Back to Top